A beautiful poem by St. Ephrem the Syrian, courtesy of Fr. Aidan Kimel’s blog. Note the Ethiopian icon, one I’ve not seen before. 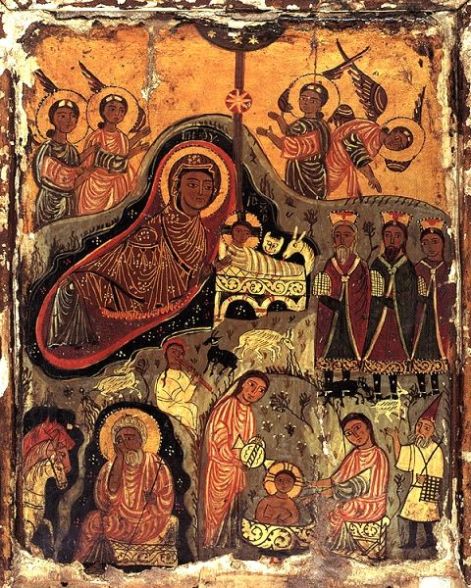 Glory to that Voice that became a body,
and to the lofty Word that became flesh.
Ears even heard Him, eyes saw Him,
hands even touched Him, the mouth ate Him.
Limbs and senses gave thanks to
the One Who came and revived all that is corporeal.
Mary bore a mute Babe
though in Him were hidden all our tongues.
Joseph carried Him, yet hidden in Him was
a silent nature older than everything.
The Lofty One became like a little child,
yet hidden in Him was a treasure of Wisdom that suffices for all.
He was lofty but he sucked Mary’s milk,
and from His blessings all creation drinks.
He is the Living Breast of living breath;
by His life the dead were suckled, and they revived.
Without the breath of air no one can live;
without the power of the Son no one can rise.
Upon the living…

Below are a collection of links that I enjoy perusing.  For my links on music and other arts, go here.